Living Conditions in the 1960s

Wah Fu Estate was built during the time that typical families lived in tenement buildings and shared the units with several households. Subdivided flats (板間房) were common. A survey in 1957 stated that a typical tenement building floor had an average of 2.26 households living there, and each household had an average of 4.7 people.[1] Not only the living condition was crowded, tenants often shared utility spaces such as bathroom and kitchen. Hygiene conditions could be improved.

Living conditions were worse for those living in squatter areas. The Shek Kip Mei Fire in 1953 speeded up the British colonial government at the time to establish Resettlement Housing. Among the Mark I – VI Resettlement Housing blocks, in the earlier blocks multiple families might need to share one cubicle if the unit’s capacity was not reached, while the later ones had various sizes of cubicles to accommodate different family needs.[2][3] Also, some had shared bathrooms and kitchens, while others had private bathrooms and kitchens within the cubicles (Ibid.).

It was under these premises that the architect of the Wah Fu Estate designed the dream home for future living. 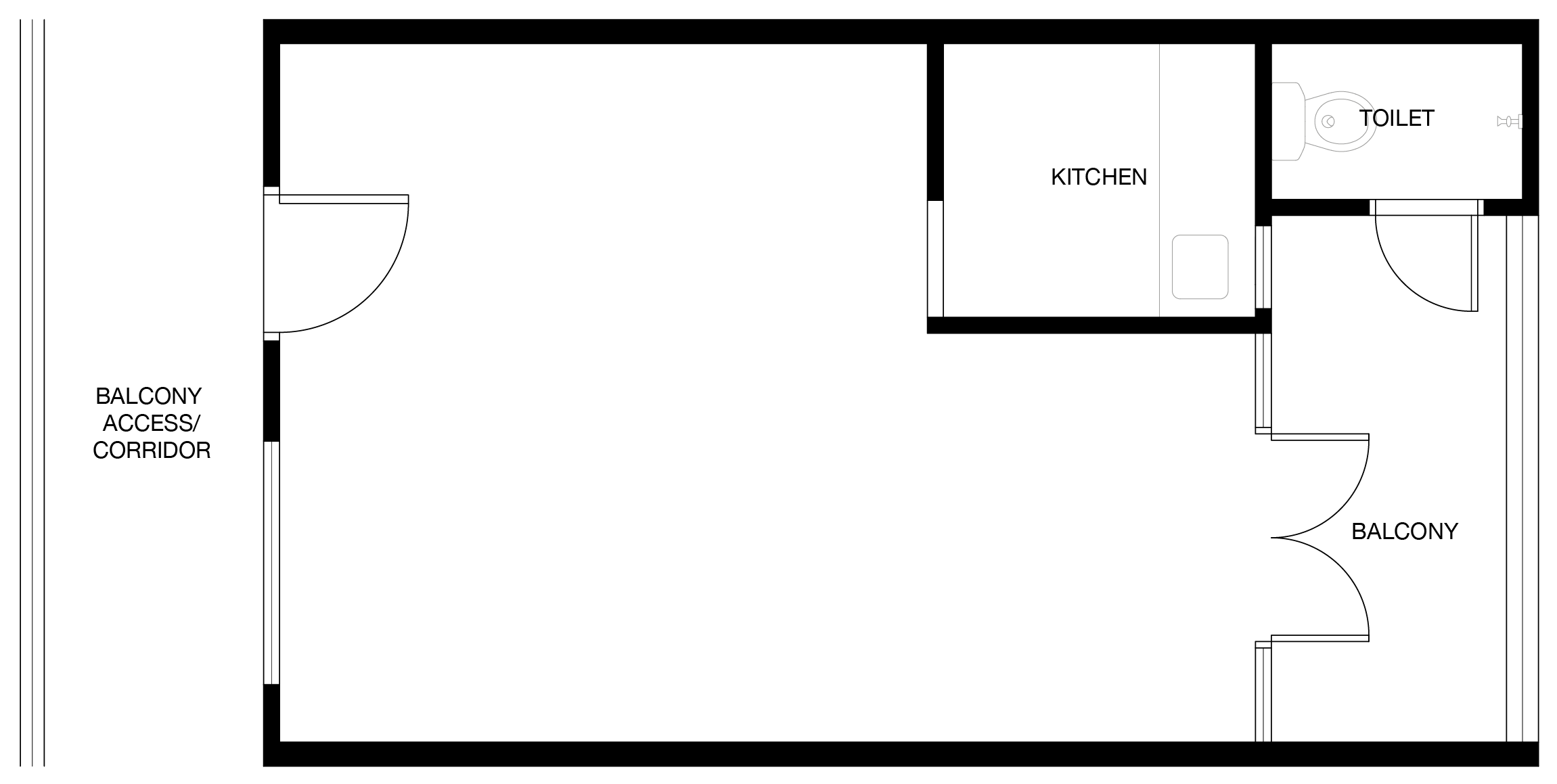 Typical floor plan of a residential unit in Wah Fu Estate when residents first moved in (basic kitchen and bathroom facilities are provided but with minimal wall partitions).

If Wah Fu Estate’s building blocks were designed with a modern architectural approach, the interior of the flat’s layout also followed the same philosophy. Le Corbusier developed the ‘free plan” in modern architecture – an open plan layout for the interior space of architecture to be free from any structural walls or partitions that divide the space,[4] so as to allow for fluidity and flexibility within the space. The Wah Fu flat layouts, though not entirely free from any walls or partitions, were designed with the intent to minimize walls and partitions of spaces, therefore allowing more flexibility for the tenant to create their own ideal living configurations. In the simple 3x8m flat space, except for the required enclosures for bathroom and kitchen, the rest of the space is “open”.

Flexible Layout for the Changing Demography

Take a typical Wah Fu Estate flat in the “old slab” typology” as an example. The recommended occupancy was for 6-8 people. The Hong Kong Housing Authority (HKHA) published a typical floor plan of an “old slab” flat in 1968, indicating recommended locations of partitions within the flat that help plan the interior space to accommodate for 6 family members. In reality, many tenants improvised and created different configurations within the flat, as many of them lived with a much bigger family size. During prime time, it was common to find families with 11 members living in the same flat. Therefore, the almost “free plan” layout in the Wah Fu flats provided flexibility for tenants to create their own dream home.

From the way Liao designed the Wah Fu Estate residential flats, it can be referenced as the kind of typical family lifestyle the architect aimed to create in the post-war period (1950s and 1960s).

The 1960s was still the period when a typical Hong Kong family had large numbers of members. Having many siblings in the family was common. This coincided with the period that the Family Planning Association of Hong Kong (FPAHK) initiated the campaign “Two is enough” (「兩個夠哂數」), advocating that young families should consider only have two children instead of many.

Also, it was still common that young families lived with the older generation, that is, grandparents, during that time.

Therefore, an ideal family structure at that time might comprise 1 to 2 children, the couple, and 1 to 2 grandparents. This might be how a typical public housing flat layout was dedicated to a family of 6.

Reviewing the living conditions typical to the post-war period, it was common to have to share bathrooms and kitchens with other tenants. We may now take separate bathrooms and kitchens within the flats for granted, but at the time when Wah Fu Estate was designed, it was taken as a leap of hygiene improvement, reflecting on how the aspiration of future living conditions should be.

On two ends of the flat, Liao also had specific design thinking on the use of spaces. The balconies of the flat in Wah Fu Estate were intended to be the transition space for residents to connect to the natural environment. In an interview, Liao mentioned he liked the view of the South China Sea at the Wah Fu site, and thus designed Wah Fu Estate in a way that residents can also enjoy this view.[5] For those flats that are not facing the sea, Liao mentioned they face another natural scenery – the hills (Ibid.). Even in Hong Kong nowadays, such site context and connection with the natural environment is hard to find. Liao highlighted the connection between one’s living space and the surrounding natural landscape, and designed the flats and their orientations to optimise such connection, hinting the importance of the spatial connections between inside and outside, and its effects on the well-being of people’s living.

On the other end of the flat, the entrance to the flat opens up to a communal corridor. Some corridors are open corridors (that is, not enclosed), which were labelled as an access balcony in the original drawings. The open corridors often look into the open spaces such as playgrounds or greeneries on the ground level. These open spaces are often used by residents of Wah Fu. When a resident steps out of his/her flat, one’s sense of community is supposed to develop through such visual and spatial connections to communal spaces. Liao perhaps hoped to strengthen the sense of ownership among residents, that they were no longer renting cubicles in tenement buildings, but instead living in homes that they belonged to.