The Planning of Neighbourhood-level of Communal Spaces

Apart from its signature town centre area, the Wah Fu Estate 1964 masterplan designated other neighbourhood-level communal spaces including rooftop play areas perhaps inspired by one of the ‘Five Points of New Architecture’ by Le Corbusier in his modern architecture masterpiece, the Villa Savoye.[1] While the Villa Savoye roof terrace was designed for domestic use, the roof level playscapes in Wah Fu Estate were for the community consisting largely of young families with children.

Although the provision of other communal spaces was not clearly shown on the plan, the overall layout and configuration of the Estate embedded the potential for communal spaces to be strategized and coordinated. For example, Liao arranged many of the old slab-type residential blocks in Wah Fu (I) Estate to interlock with one another to create communal open spaces at ground level. This kind of architectural configuration partially encloses the ground level open space creating a sense of intimacy and security, while allowing sunlight and ventilation to penetrate between the blocks.[2] In so doing, Liao’s design also provided ground level open spaces with sufficient width and length to accommodate a range of functions in the future. 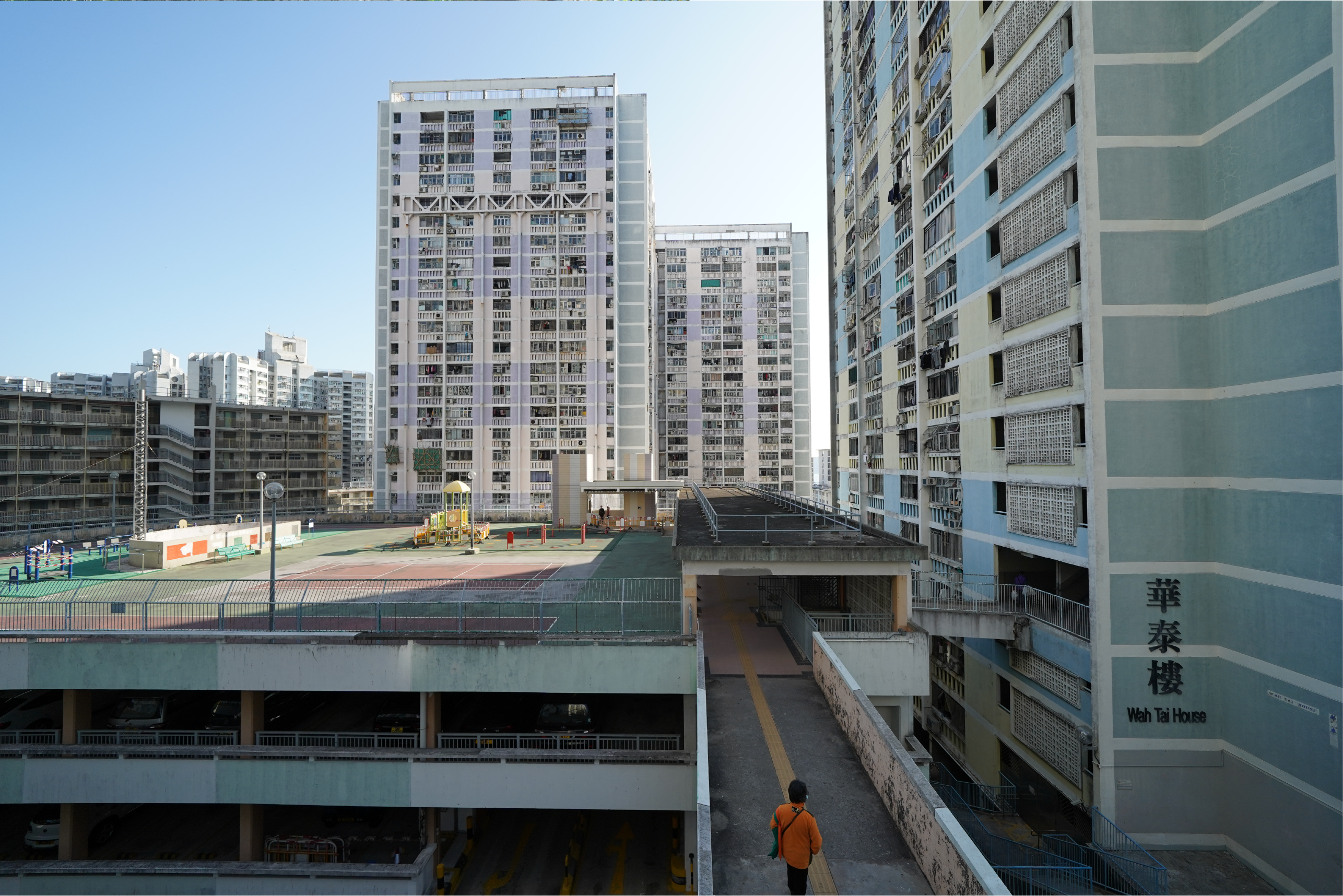 Rooftop playground on a carpark

The site formation strategy also served to configure the communal spaces. Moderate modification of the existing topography, avoiding massive excavation and excessively tall retaining walls, allowed for a network of terraces with modest slopes, steps and retaining structures. The flat terraces provided scope for communal spaces, while the slopes provided opportunities for greening, and the steps linked up the at-grade pedestrian circulation network. Terraces varied in size according to the variations in topography, resulting in different pockets and spaces suitable for different users and activities.

Landscape design in Hong Kong was barely in its infancy in the 1960s. Little is known about the early design of the playgrounds in Wah Fu Estate, except for a few photographs featuring play equipment. There are other landscape spaces in Wah Fu Estate, but as with the other types of communal spaces, little is known of their early planning and design intent. How the communal spaces in Wah Fu were reprogrammed and reequipped over the decades, and transformed to serve their current functions, has not been well recorded. A plan in the HKHA’s annual report (1973) shows basketball courts in some of the terraces and there is mention of table tennis facilities. Despite this, the amenity facilities were insufficient for the estate’s large population.

A newspaper article entitled ‘Beaches and Wide Open Spaces but Some Children Still Remain’ even referred to residents as ‘The prisoners of Wah Fu’, and advocated improving the estate’s facilities.[3]

Communal Spaces within the Building Blocks

Besides the communal spaces open to the sky, there were also many within the residential blocks themselves. Most of the ground floors were designated as corridors or communal spaces with minimal vertical structural enclosure to allow better ventilation. These areas become social spaces where residents could walk freely and explore their preferred routes. The lower floors of the low blocks of the ‘twin tower’ building type in Wah Fu (II) Estate, were designated as corridor and communal space, reducing the need to drastically alter the configuration of the slopes under the structures. A ‘human touch’ was added to these areas’ main function of pedestrian circulation, thanks to those spaces being freely accessible to all residents and becoming the settings for social interactions.

In the last two decades, however, security and safety measures have been upgraded in almost all housing estates in Hong Kong. Security gates have been installed at the building entrances of residential blocks, and residents’ circulation patterns are dictated by the locations of the gates. The case of the security gates at Wah Chui House clearly illustrates the conflict between accessibility and security concerns.