However, it might not be accurate to call it a “redevelopment plan”. Rather than rebuilding the Estate at the original site, the HKSARG plans to relocate the majority of current residents of Wah Fu Estate to five adjacent sites at Kellett Bay around the existing Wah Fu Estate. These five sites are located at Wah Lok Path, Wah King Street, Wah Fu North, Kai Lung Wan North, and Kai Lung Wan South.

The new Wah Fu Estate is going to be built on these separate sites, which will be connected mainly by elevated roads and footbridges. It is indeed largely a relocation and development project, with only residents from Wah Chui House and Wah King House to be resettled back to the current Wah Fu Estate area. The land use of the original site of Wah Fu Estate remains largely unknown to the general public at this moment, despite the claim that it is to be used as public housing projects as well.[3]

In the latest update that the Housing Authority releases to the Wah Fu Estate residents in November 2020, it is proposed that the relocation / resettlement will happen in three phases.

The HKSARG commissioned a feasibility study of the redevelopment project in 2015.[5] The Transport and Housing Bureau and the Housing Department began to proceed with the rezoning procedures and carried out public consultations with local residents and other stakeholders since March 2016. The proposed project from the HKSARG is not without controversies during the consultation process though most residents consider the redevelopment essential.[6] 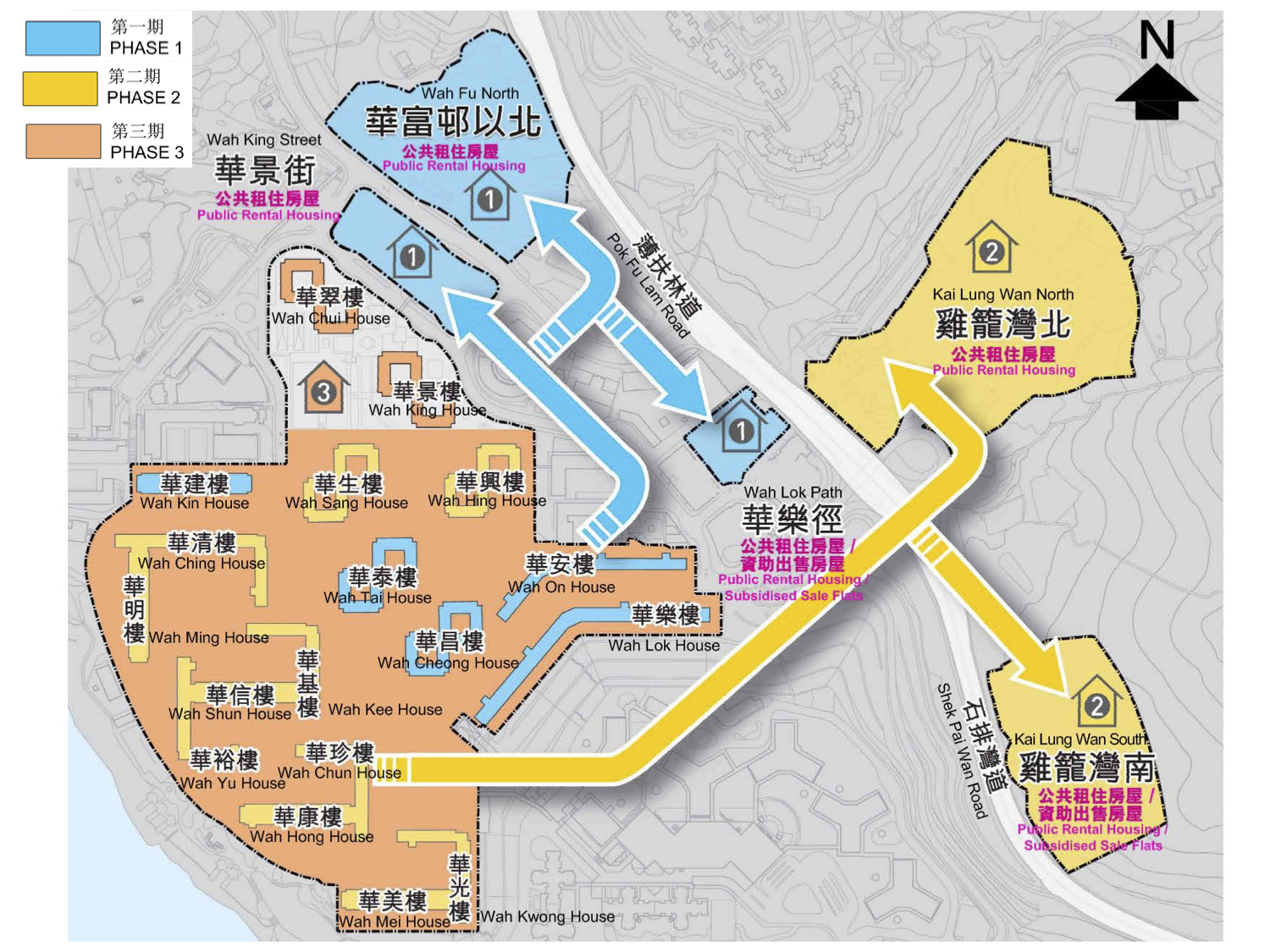 First, its dispersed design could have a huge impact on the everyday life of Wah Fu residents. Although it is understandable that, as the Housing Department defended,[7] residents of Wah Fu Estates should be first relocated to nearby space in order to mount the redevelopment of Wah Fu Estate as quickly as possible, such approach effectively splits the Wah Fu Estate community into three satellite sites that are weakly connected by the proposed pedestrian networks of elevated roads and footbridges. Residents in some of these satellite blocks, especially the one in Kai Long Wan South, may have difficulty in reaching various facilities to meet their daily needs. More profoundly, the fragmented design may harm the precious sense of community that the old Wah Fu Estate has fostered for decades.

Besides, the councilors of the District Council also express the lack of trust towards so-called professional advice of the government and its bureaucrats. As reflected by the councilors, the general public looks for much more details of the Wah Fu Estate redevelopment project as a whole from the government.[8] Efficiency and transparency are now essential to public housing projects.

In the Town Planning Board Meeting on 17 May 2018, local residents also voiced mixed opinions towards the project. Although some representatives of Wah Fu Estate residents expressed support towards the project, they maintained that it was due to their strong desire to have the redevelopment scheme started, and that they were discontented with the details such as its location, design and living space provided by the new flats.[9]

Last but not least, the general public is now much more aware of the values of natural environment and cultural heritage. The balance between development and conservation has to be considered. Some residents of nearby districts, especially those of Chi Fu Fa Yuen, strongly perceive that such redevelopment may have negative impacts to the natural environment and built heritage (the remains of the Old Dairy Farming facilities) nearby. Some people are also concerned about the preservation of the remains of Kai Lung Wan Cemeteries.

In early 2017, the HKSARG updated the plan and expected that the first phase of redevelopment will begin intake in 2025.[10] In 2020, the government announced the new residential blocks would be ready for the first batch of residents’ intake as early as 2027, which was another year of delay after the one-year delay in 2019. [11]

[6] Town Planning Board (2017). Summary of representations and comments and the Planning Department’s responses in respect of the Draft Pok Fu Lam Outline Zoning Plan No. S/H10/16. [pdf] Annex V. Available at: https://www.info.gov.hk/tpb/en/whats_new/S_H10_16/R_S_H10_16_Annex_EN.pdf.