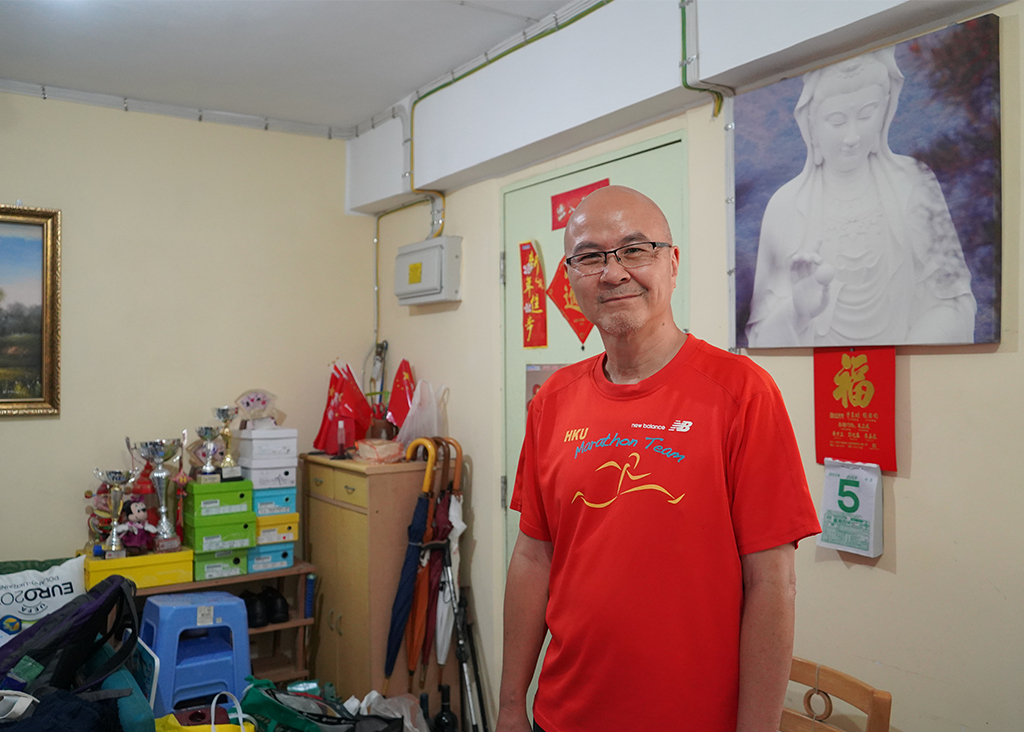 Mr. Wu’s opinion on his flat’s level and position

“Residents of Wah Fu Estate are decent people. I feel safe for my daughter to grow up here.”

“During that period of time I felt unwell”. Mr. Wu was once an accountant, yet he retired a few years ago as he faced health and family problems. Fortunately, with the help from social workers, Mr. Wu was allotted a flat in Wah Fu after a year, and he moved into Wah Fu Estate in 2012. However, by the time he moved into Wah Fu Estate, his wife had already left him and he then took up the responsibility to raise his child alone. “I made a site visit in Wah Fu Estate back in the days when I was still in university, I have never thought of ending up living here”.

Wu’s family used to live in Wan Chai, the north shore of Hong Kong Island. “Living here is just as convenient as before [moving in]. We’re still on Hong Kong Island”. Mr. Wu is very happy with the Estate’s location, with convenient means of transportation for his daughter and him. “It takes about the same amount of time for my daughter to go to school”. He is also delighted with the extension of MTR service to the Southern District, where he sees little traffic congestion since then. “Some people take MTR to work, it thus frees up the Aberdeen Tunnel”.

“Residents of Wah Fu Estate are decent people. I feel safe for my daughter to grow up here”. Mr. Wu sees that Wah Fu Estate is an estate of elderly, so it’s unlikely for his daughter to be negatively influenced by her neighbours. Even though they are newcomers, they have some success in getting along with neighbours – at least they know some neighbours from the same floor. “I do greet my neighbours, and I know some of them”, Mr. Wu said, “but we are not that close. They won’t invite us to their homes. I think that era is long gone”.

Mr. Wu also shared his involvement in community services of Churches and political parties. “Although I joined the Democratic Alliance for the Betterment a long time ago, I wasn’t actively engaged in those works until I came to Wah Fu Estate.” He also has a stronger feeling with Wah Fu Estate as a community, where people could participate in community activities and grassroot politics more easily here. “When I was in Wan Chai, the communal bond was weak. I wasn’t active within the community either. However, I have become more active since moving in”.

Some thoughts on housing quality

“As a unit of a public housing project, there is nothing more to ask for. Having said that, if I am asked to comment on any rooms for improvement, I could say a few”. He is particularly suffering from dust and noise, as his place is too close to Wah Fu Road. “I knew people living a few floors up, they don’t have the problem of dust and enjoy a better view. I guess living on the upper floor would be great”.