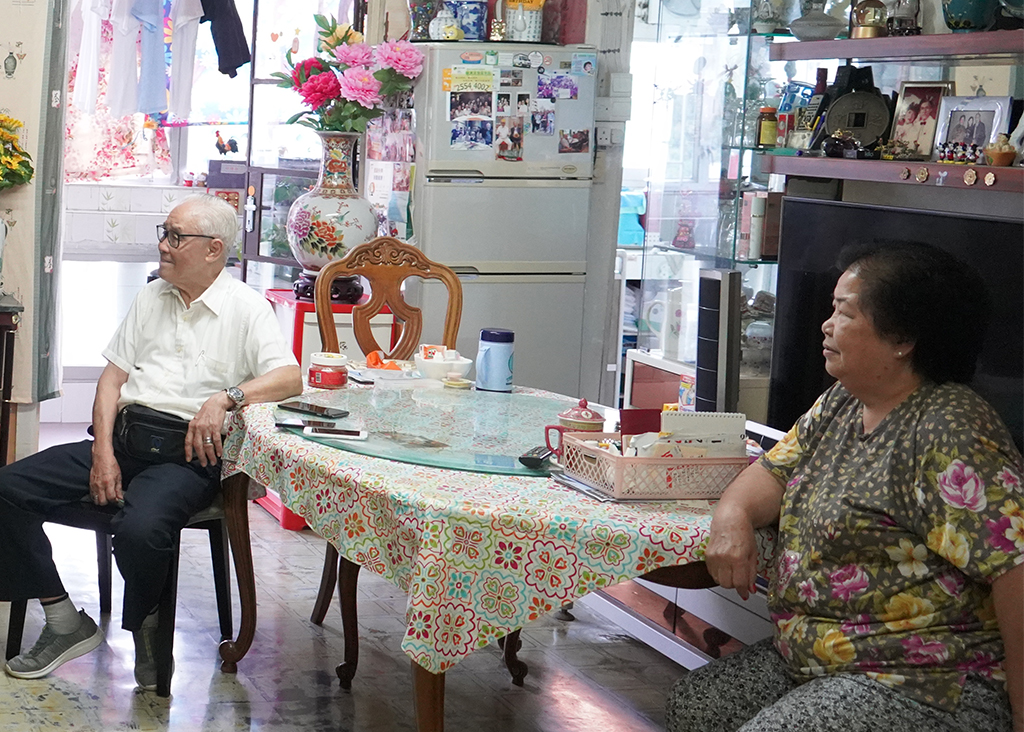 Mr. and Mrs, Lau sharing the merits of living in Wah Fu Estate

Mr. and Mrs. Lau have been living in Wah Fu Estate since 1971, and they have witnessed all kinds of changes in this Estate. Their flat was once filled with their five children, but as they moved out one by one, only the old couple stayed. The same happens to the whole building as well, where familiar faces departed one by one, replaced by an influx of new faces.

“I knew that this is a ghost district”, says Mr. Lau. As Wah Fu Estate is located near a former cemetery, its name is closely tied with ghosts and supernatural phenomena. According to Mr. Lau, the builders have dug up bones from the construction site. “Well to me, Wah Fu Estate was just a rocky hill before the estate was built. I knew much better than you do as I was living nearby long before Wah Fu Estate completed, and you were living in Chai Wan back then.”, says Mrs. Lau, refuting her husband’s ghost story. As she has been playing around the rocky hills and the warehouses near Wah Fu and Wah Kwai Estates when she was young, this place was all too familiar to her and there is nothing supernatural about this place. “Besides, this is a matter of faith, we simply do not need to be afraid. We are living perfectly fine now, and this is what matters.”

The Changing Life in Wah Fu

“Back in the early days, we had nothing but lorries to ride.” Some of the most dramatic changes in life was felt in the domain of transportation. “At first, we only rode the lorries to Aberdeen, and they cost 20 cents per trip. From there, we might take the route 7 bus to places like Sai Wan.” Wah Fu estate started with very limited transportation options, but things gradually improved. “We then had our very first bus stop and the bus route 4, then it  came bus routes 73 and 48.” And now, they are very happy with the variety of transportation options. “It is like you could go anywhere.”

For the old couple, life in their flat also changed quite a bit. “We used to open our doors and windows at the same time as it is the only way to keep ventilation good.” The Lau family used to open their doors to keep their house cool, yet nowadays they are less eager to do so because it would draw in hot air instead. “After my kids left me, the Estate got populated. There are more exhausts from our neighbours’ air conditioners, and we are forced to buy our own air conditioner.” The interiors of their flat had changed a lot as well. “It was so crowded when my kids were still here, and it was not easy to move around.” As their children left them, they removed walls and rearranged the flat, “and it is better now.” But one thing didn’t change much, that typhoons and strong rain still trouble them. “The balcony windows cannot be shut completely, and rain gets in when they hit towards the flat.”

“We have a great community here, when you need help everyone comes to help you.” For Mrs. Lau, Wah Fu Estate is always a place with a strong community. Nonetheless, they would miss their old neighbours and friends who they have had a great time with. “We had a lot of friends back then and we even worked together in the neighbourhood committee, but a lot of them either moved away or departed. I think among them, only six families are still living here.” Despite this, they believe that the essence of the Wah Fu Estate community was still well kept. “Although some newcomers usually close their doors. But if you greet them and engage them more often, you’ll get acquainted with these new neighbours quickly. Your personality is all that matters,” Mrs. Lau says.

However, the same may not be said to the variety of facilities in the community. “In the past, we had everything. Now, we lack everything.” When Mr. and Mrs. Lau first came to Wah Fu Estate, they experienced vibrant development and a commercial complex soon emerged in upper Wah Fu area. However, the complex nowadays gets less and less popular and many shops shut down. “Now the district as a whole is getting more and more quiet.” Although there is another commercial complex downhill from their residential block, Mrs. Lau is reluctant to go there. “It would be unbearable to walk downwards during hotter days and most probably I would need to take a ride back home. But if I have to take a bus anyway, why not go to Aberdeen instead?”

What are their thoughts on the upcoming redevelopment plans? “By the time it matters to the residents like us, we are probably no more.” “Besides, I have no opinion on this matter. Whatever it will be, God wills it.”