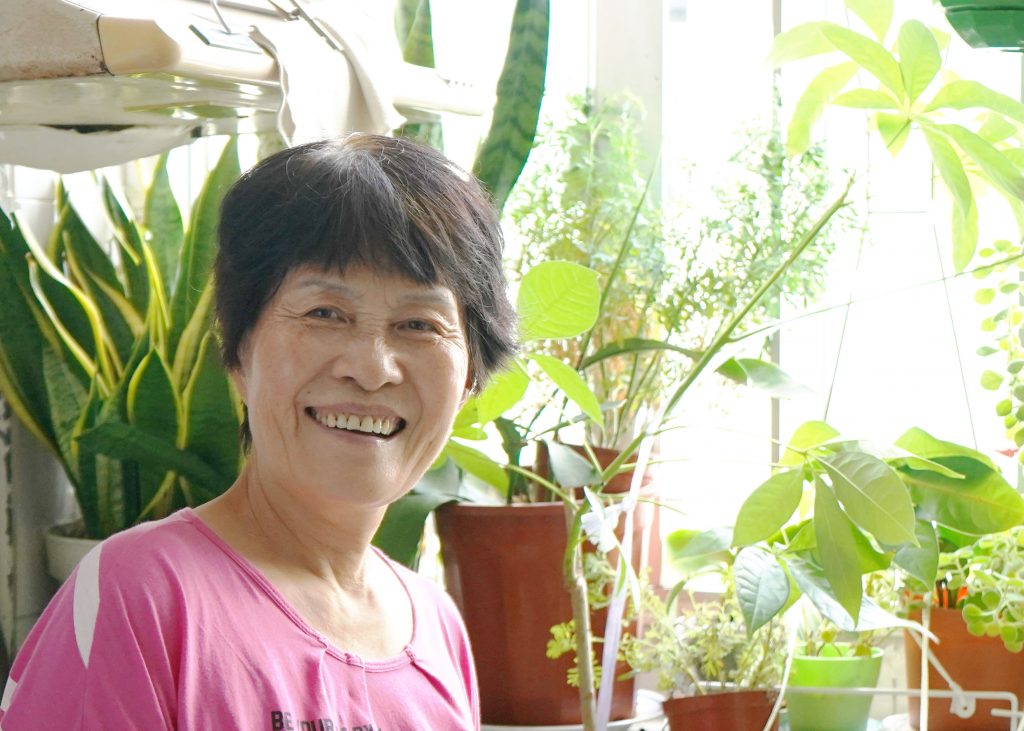 Ms. Ho Pik Han’s observations and opinions on the practice of burning offerings

“I am literally living in a broken house.”

“I am literally living in a broken house”. Pik Han is now living alone in her flat. She is looking forward to the Wah Fu Estate redevelopment as to solve problems on building conditions once and for all.

“I really prefer to live in Hong Kong Island rather than in Kowloon. People here are much nicer”.

Pik Han once lived in a squatter house somewhere in Kowloon, then she was relocated to a different resettlement estate and ended up in Lam Tin. “When I was living in Kowloon, I felt that the people were really violent. I saw a lot of Hokkien and Chaochew people beating up other people, I was afraid of them”. With such an impression in mind, Pik Han hoped to live in Hong Kong Island as far as possible. The chance came in the 1990s when Lam Tin Estate was going to be redeveloped. After some negotiations with the Housing Authority, she found her new home in Wah Fu (II) Estate. “They let me visit Wah Fu Estate before I made my decision and, after standing in the room for 45 minutes, I said, ‘This is good’”.

“People here are more tender, much better than those in Kowloon”. Pik Han is happy with her new neighbours. “To me, Wah Fu Estate is largely a place of elderly. Quite a lot of them are former fishermen, and they live a peaceful life. They like to spend their days in the park. However, I also noted that there are people gambling with chess. Such a thing probably involves gangsters as they got sentries. The police tried to investigate but, with those sentries, they could leave without a trace by the time the police came”.

“Ghost is quite a thing in Wah Fu”, Pik Han continued to share her observation, “when I was still working as a security guard in Wah Fu Estate, I heard from my colleagues that he saw troops of ghost patrolling at night. He was so scared and took leave that day”. Being notorious for ghosts also caused her some inconvenience. “My son’s Father– and Mother-in-law were superstitious, and they refused to come to my house even once. [But] this is a matter of courtesy!”

“Besides, the people here really take this matter seriously. They have festivals to worship ‘those things’. On that day, people would burn incense and stuff all day, and since Wah Fu Estate is quite windy, the dust gets into my house”.

Being a resident and a security guard in Wah Fu Estate since the 90s, Pik Han sees quite a lot of suicide cases in the Estate. “Back then a young boy jumped from the building, and the next day another boy committed suicide as well. Another morning, when I was about to end my night shift, a young woman jumped from the building. We had to cover her and to clean up the scene quickly”. She found that not only young people commit suicide, there are also elderly cases. “I think that the problem is social”.

In recent years, Pik Han saw changes in Wah Fu Estate. “When I was still a security guard here, I was sent by my seniors to all kinds of positions at different site locations”. She attributed this situation to the influx of migrant labors. “The security sector is more and more involved with workplace politics.

“My grandson visited me and said, ‘Hey grandma, this is a broken house!”. Pik Han complained that falling paint and cement debris have become routine in her life. “I admit that the paint could be a result of rushed interior decoration, but the cement is certainly a consequence of poor building quality”. The situation is made worse as the flat is very humid, that cement would break down even more readily. “The house is so humid that I once bought a table made of plywood, and mold grew rapidly so I had to throw the table away”. Pik Han revealed that the falling debris could have taken her life, “One day the debris fell into my bed, good that I wasn’t sleeping at that time”.

“I have tried to approach the Housing Authority for help, but it didn’t work”. Pik Han lamented, “They would only fill up the holes, but debris would simply drop elsewhere”. Currently, Pik Han could only resort to stickers and, when possible, paint up the house by herself. “Because the flat will be demolished for redevelopment soon, there is no point in renovating the house now”.

“I am looking forward to the redevelopment scheme”. When Pik Han was asked about the features that she would like to see in the redeveloped Wah Fu Estate, she hoped that there will be good design and will leave sufficient space between buildings, so that ventilation would still be good. “And, if possible, the (redeveloped) estate shouldn’t be placed too near to the hills. We are afraid of mosquitos”.