Wah Fu Estate was constructed on a site previously used as a cemetery with hardly any existing community network to connect with nearby. There were some illegal squatter settlements on the hillsides around Kellett Bay and a few small farming villages such as Shui Choi Tin Village along the stream above Waterfall Bay. Their community facilities (e.g., wet market and restaurants) were entirely inadequate to provide for the daily necessities of such a large number of newly-arrived residents. The nearest urban areas of Western District and Aberdeen were also not easily accessible at that time. Given the new Wah Fu Estate’s remote geographical location and the lack of existing community facilities, the Hong Kong Housing Authority (HKHA), the government’s agency for providing public housing, sought to develop the Estate as a self-sustaining community with sufficient and convenient facilities to provide for residents’ daily needs. [1]

A Self-sustaining Community and the “Town Centre” Concept

Conscious that Wah Fu Estate had to be equipped with all necessary amenities to make it a self-sustaining community, the initial design strategy called for a variety of commercial, recreational, educational and institutional facilities. The Wah Fu Estate plan unveiled by the HKHA in 1962 included ’23 blocks with 6,154 flats, 50 shops in a “supermarket” shopping centre, and four schools’. [2] However, it took time conceptually and spatially to resolve how all these amenities should be laid out and interconnected within the Estate to serve the resident’s living requirements.

Hong Kong’s post-war urban planning was heavily influenced by British experience in the field. Dr. Donald Liao, chief architect of Wah Fu Estate, referenced the town of Guildford in the U.K., a typical English county town with a population of approximately 50,000, comparable to the projected population of Wah Fu Estate. Liao was inspired by Guildford’s town centre where most local amenities were located.[3] Conceptually, a town centre provides a focal point for the community, acting as a magnet for people and activities. The design of Wah Fu Estate drew on this idea, creating a hierarchy of spaces in the community, with the town centre as the most important public area in the Estate and more neighbourhood orientated activities closer to the residential blocks. Wah Fu Estate’s ‘town centre’ concept was clearly presented for the first time in the HKHA’s 1964-1965 annual report as follows:

The Town Centre will be the ‘heart’ of the estate. Briefly, it consists of a podium out of which will be built shops, a restaurant, community hall, and a department store. On two sides, occupying the lower floor of adjacent blocks of flats, will be more shops, a clinic, maternity home, post office, and a public library, while on three floors below the podium there will be accommodation for a youth centre, market stalls, and other communal facilities. On the four levels a total of over two acres will be available for traffic-free pedestrian circulation and sitting out. Adjacent to the Town Centre there will be a bus terminus designed in consultation with the traffic authorities and the China Motor Bus Company.[4]

Wah Fu Estate was now famous in Hong Kong for its ‘pioneering’ ‘town centre’ concept which formed the foundation of the Estate’s master planning, but Wah Fu was not intended to be a fully-fledged ‘new town’. As Hong Kong rapidly industrialised in the 1960s, the British new town concept was proposed to cope with the city’s burgeoning population growth. In a 1968 interview Liao declared of Wah Fu Estate:

It would be unfair to call it a new town. It has no industry and was never intended to be a new town. But because of its location, outside an urban area, it has to have many of the services and facilities which new towns have.[5]

In other words, Wah Fu Estate was not developed as a stand-alone community. Most residents had to commute to the city centre and other parts of Hong Kong to earn their living. Nevertheless, Wah Fu Estate was self-sufficient in terms of residents’ daily needs and was not reliant on other districts for facilities including wet market, banking, educational and medical services. Liao envisaged Wah Fu as more than just a public housing estate, intending it to be a community of 50,000 residents complete with facilities such as a library, primary schools, kindergartens and homes for the elderly integrated within the Estate.[6]

Unlike Hong Kong’s earliest public housing projects, Wah Fu Estate was quite remote from the city centre, so the Wah Fu Centre was designated as the place where residents, especially a housewife, could meet their daily needs. During the master planning stage, Liao imagined what a housewife would need in her community, such as visiting the wet market and getting children to school.[7] Consequently the Wah Fu Centre, the ‘supermarket’ shopping centre, was pivotal to the town centre concept.

Wah Fu (I) Shopping Centre, usually referred to as Wah Fu Centre, is a three-storey multifunctional shopping complex built in a modernist architectural style. The underground floor houses the wet market, grocery stores and the goods loading and unloading area. The ground floor connecting to Wah Fu Road, and the first floor are occupied by other shops and facilities. The Wah Fu Centre was the only shopping complex in the original plan, apart from a handful of shops at the ground floor of Wah Lok House. Before the later construction of the shopping mall and wet market at the nearby Wah Fu (II) Estate and Wah Kwai Estate, Wah Fu residents relied almost exclusively on the Wah Fu Centre facilities for their daily necessities. 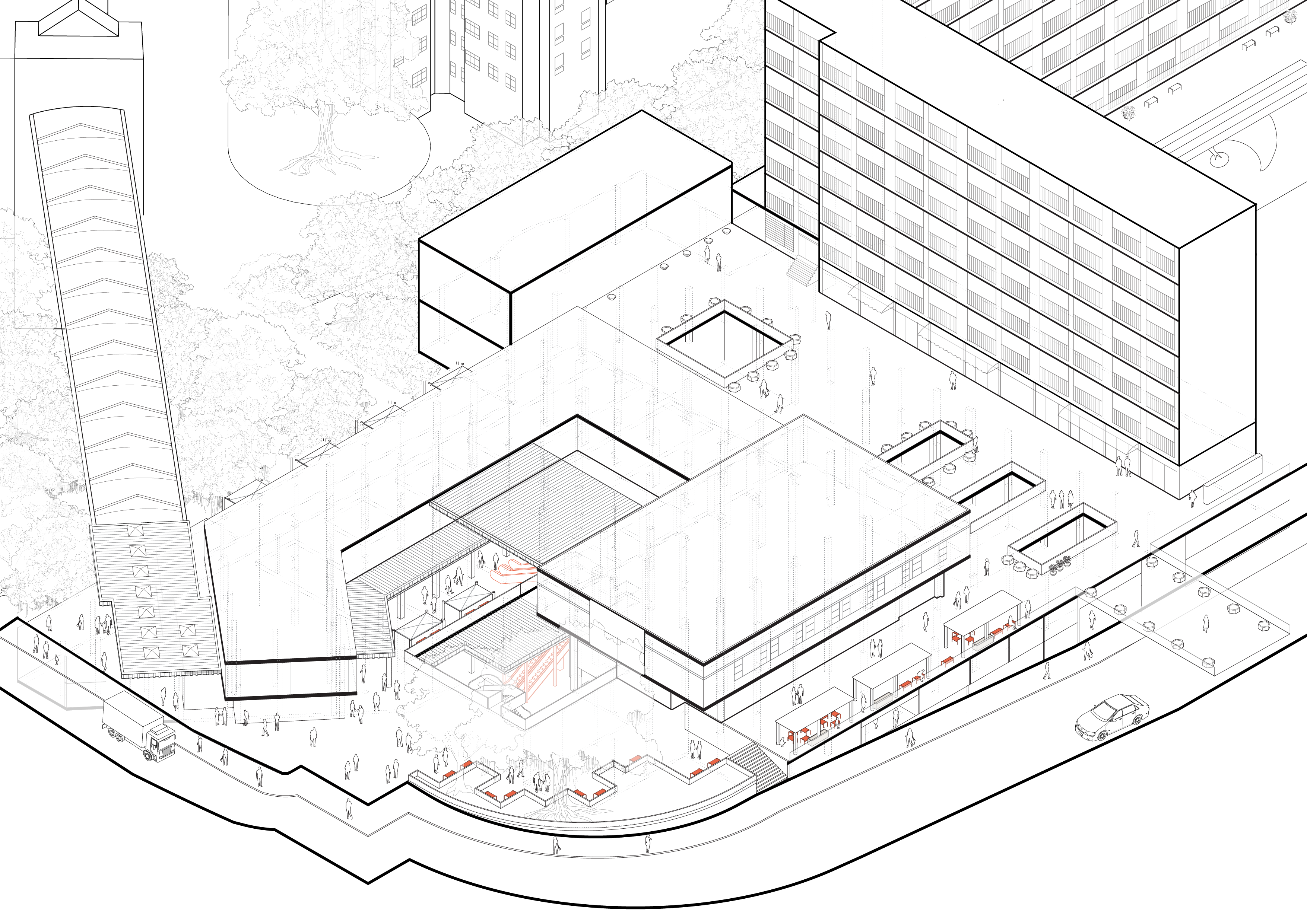 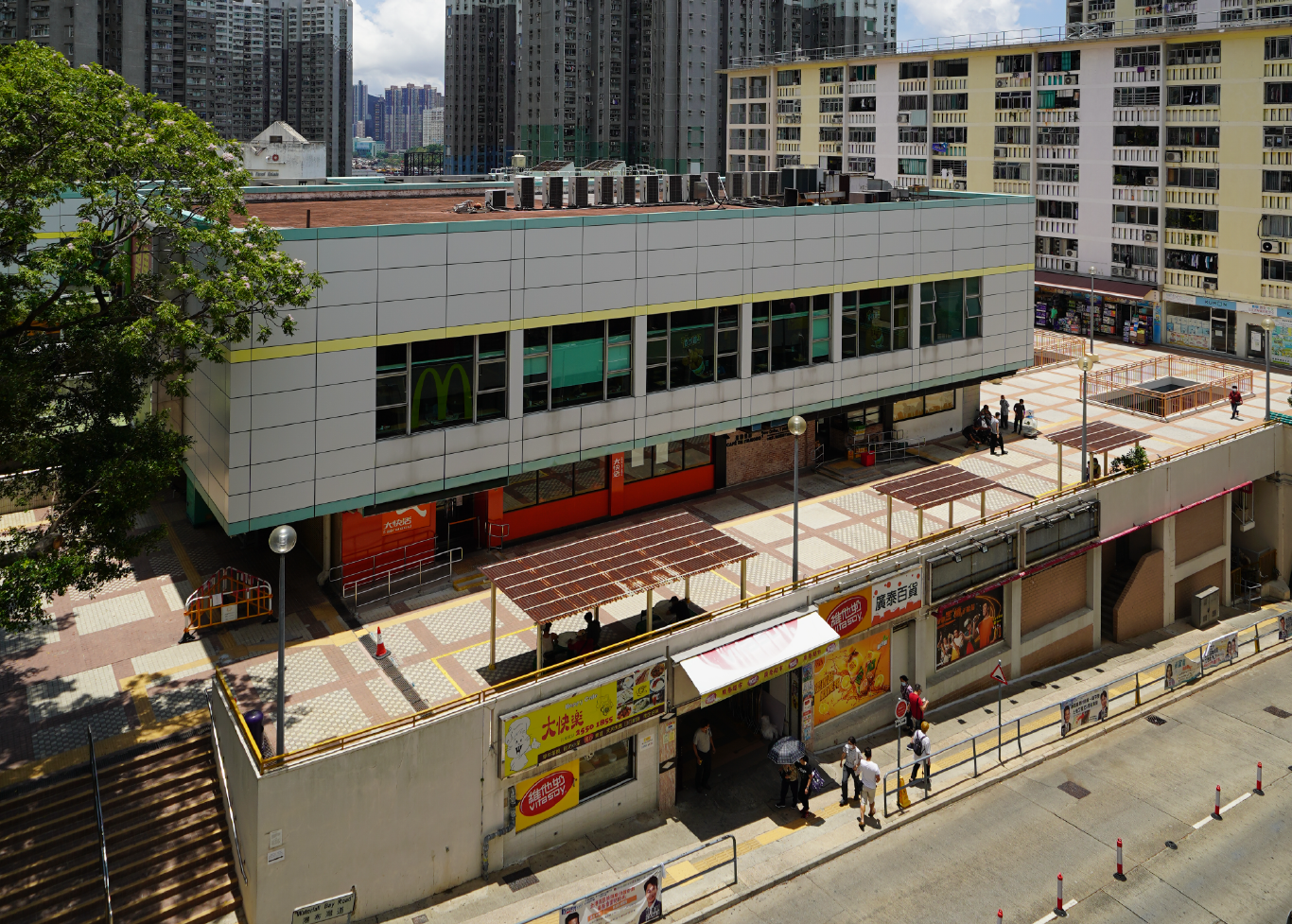 Nowadays, it seems routine to put different functions into the same building complex, but the Wah Fu Centre was the HKHA’s first multifunctional building, and Hong Kong’s first shopping complex in a public housing estate, revolutionising the concept of function and space in 1960s Hong Kong. Earlier resettlement estate and industrial estate schemes in Hong Kong provided most commercial activities and facilities at ground level in the form of shops facing the street or a children’s playground, and wet markets occupying the open space between residential blocks were uncovered just like traditional street markets. The Wah Fu Centre provided much more commercial space and a better environment making Wah Fu Estate’s community space a dramatic improvement on other public housing projects of the day.

In the planner’s mind, the Wah Fu Centre functioned not just as a shopping mall, it served as a community hall and a town square. Later with the rise of the consumer society in the 1970s, its shopping function came to dominate.