Accessibility – Within and Between

According to the “town centre” concept, the Wah Fu Centre aims to provide sufficient facilities and services to the residents of Wah Fu Estate. The well-considered planning of and interconnections between facilities, pathway networks, and locations of lifts and stairs within the Estate is therefore essential to guarantee that all residents can access the town centre easily. 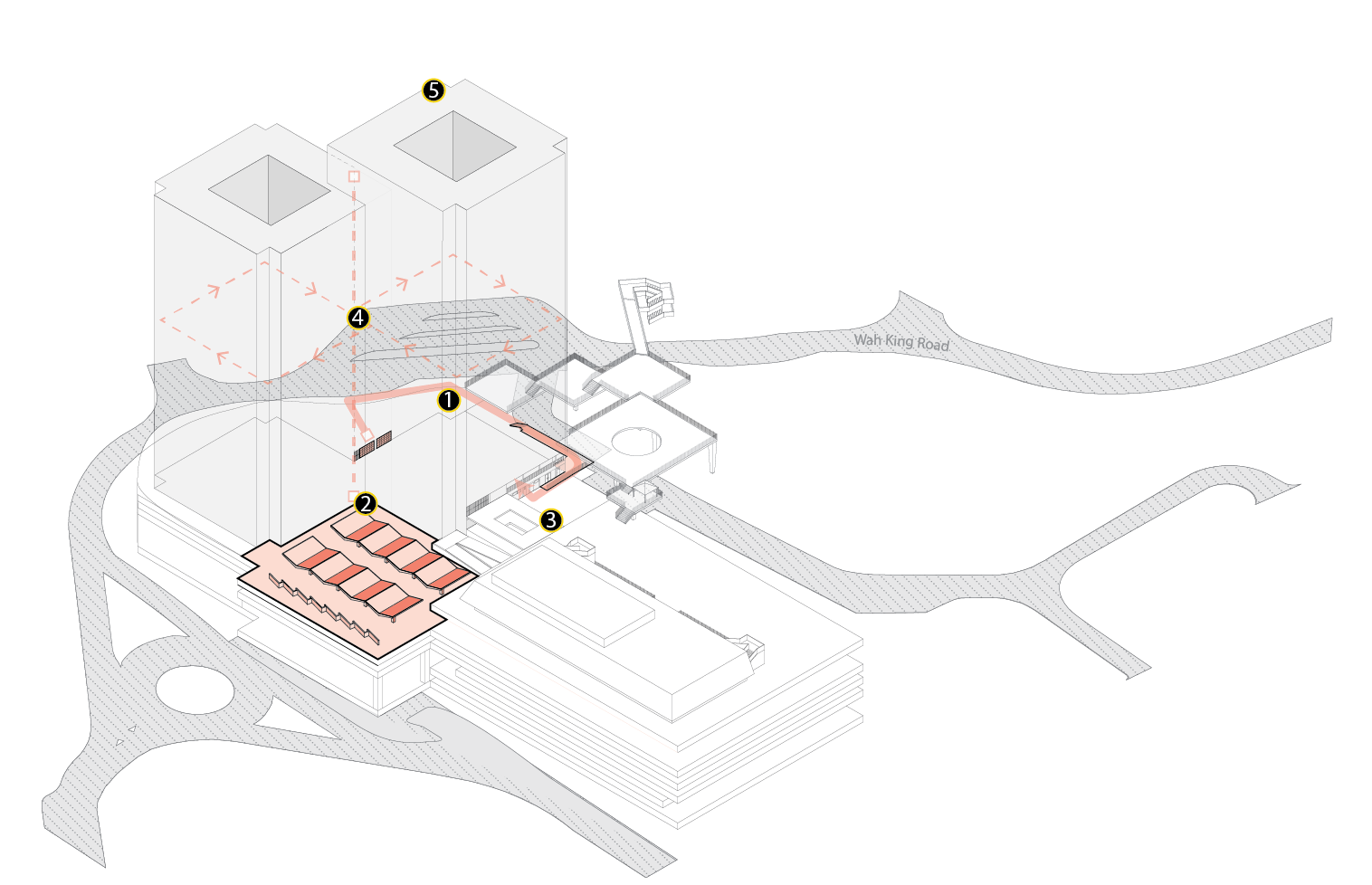 1) The access to the low block from the Wah King Road is blocked by gates. Visitors need to walk down (through the staircase) to G/F and enter through the main entrance.

3) Passage to the courtyard by the main entrance are all blocked.

4) Lifts are shared by residents of the high and low blocks. Free access between the two blocks.

The Accessibility within Wah Fu Estate

The sense of community in Wah Fu Estate is further enhanced by the proximity, accessibility, and connectivity between its public spaces including commercial complexes, basketball courts and carparks, and private spaces within the residential blocks.

However, the topography of Wah Fu Estate and the slopes around Kellett Bay and Waterfall Bay made accessibility within the Estate heavily reliant on stairs. For example, one of the main circulation routes between Wah Fu (I) and (II) was mainly by stairs, prior to lift tower networks installed in the late 2000s. Residents can also walk along Wah Fu Road and Waterfall Bay Road, although the sidewalks offer no protection from sun or rain. Alternatively, there are two other sets of stairs next to Wah Sang House that offer quicker routes for residents to access Wah Fu Road.

Stairs are very problematic for an ageing community. The 2016 by-census showed that 19.6% of Wah Fu Estate residents are 65 years old or more,[1] significantly higher than the Hong Kong average of 15.9%. Because some elderly residents are unwilling or unable to negotiate the slopes, lift towers have been installed improving accessibility within the Estate, although this cannot preserve all those social connections that occur on the ground level pedestrian circulation network of stairs and sidewalks.

Wandering in a Maze: Accessibility between Buildings

In order to save costs during construction, the Wah Fu residential blocks were designed to interlock and connect with one another in order to share common access facilities such as lifts and stairs. As a result, many circulation routes within the residential blocks are very intricate with residents very well connected from block to block, and entrances provided at different corners of most buildings.

Residents can enjoy community space on their way to and from home, which to some extent compensates for the crowded living environment within their units. In fact, the complex and intricate pedestrian network gives residents a sense of community, as the knowledge of how to navigate such a network is only commonly shared among residents. The network also allows them to access the most convenient routes to avoid crowds, stairs, sun and rain.

In contrast, visitors find it challenging to navigate such a complex circulation network, and easily get lost in such a ‘maze’, and it has become even more challenging for visitors to navigate since the installation of security gates in recent years. 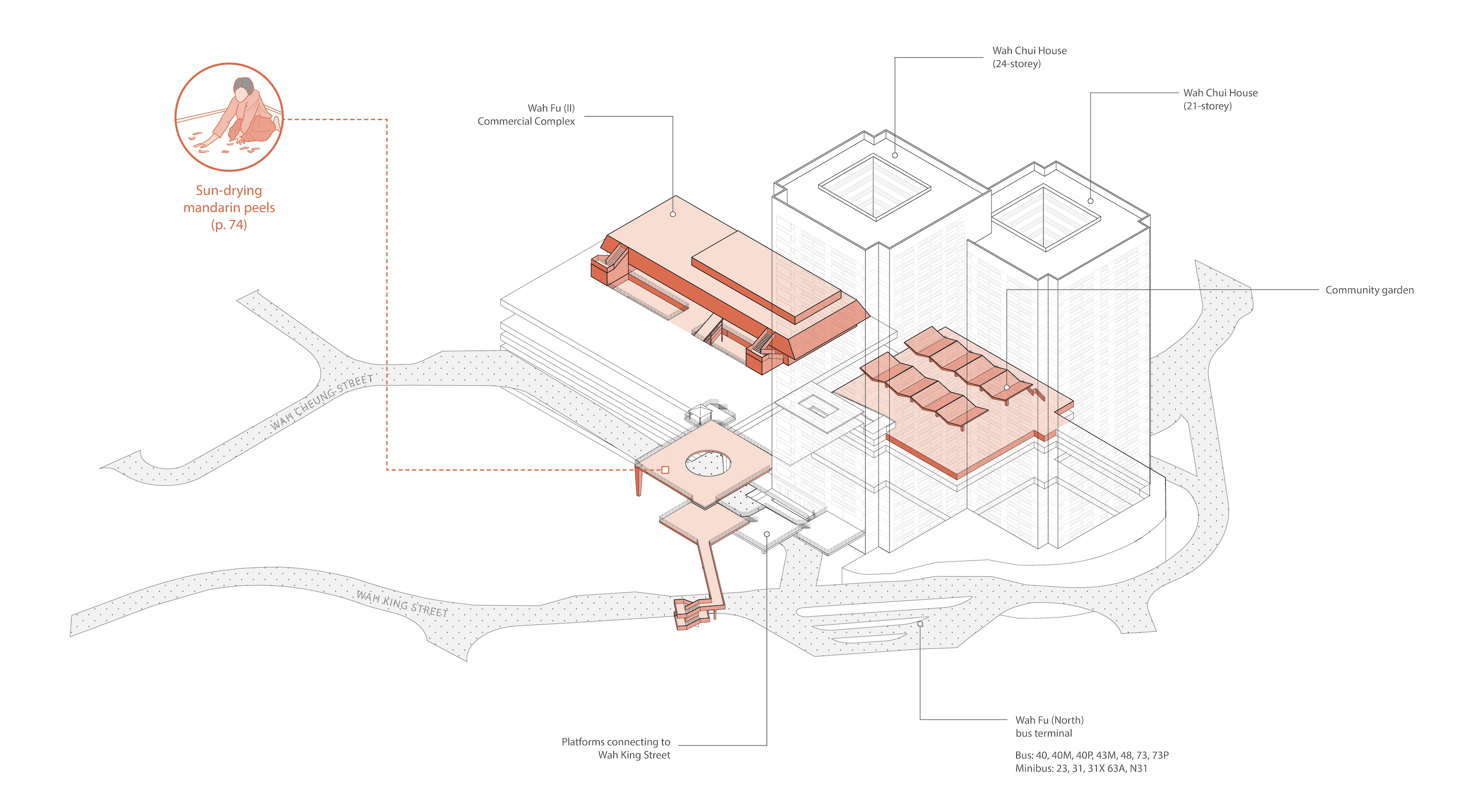 The example showing the accessibility between Wah Kwong House, Wah Mei House, Garage A and the Wah Fu Centre.

Connection with Other Districts

Wah Fu Estate’s location was quite remote from the city centre, this was why it was designed to be a “self-sustaining” community, with the town centre and other community amenities such as schools, libraries, and etc., to be established there. In the early days, there were public transport links that allowed Wah Fu Estate residents to commute to other districts in Hong Kong, but the networks were fairly poor.

Nowadays, transport networks to other districts in Hong Kong have improved a lot. They are more frequent and cheaper, and such provisions also bring changes to the concept of community. With cheaper and more convenient public transport networks, Wah Fu Estate residents now can easily commute outside of Wah Fu Estate. Visiting Aberdeen, Cyberport, Sai Wan, Sheung Wan, Causeway Bay, and even Mong Kok, become easy. They do not have to stay in Wah Fu Estate for their daily needs and amenities.

While Wah Fu Estate’s current population has a high percentage of elderlies, the government’s public transport fare concession scheme reduces the burdens of the elderly on public transport expenses. Such a scheme also supports the disabled members of the community. A disabled resident living in Wah Chui House explains that she finds it difficult to visit Wah Fu Centre as a wheelchair user because of lacking barrier-free routes in the Estate. Instead, she finds it very convenient to visit wet markets in other districts, for example, Aberdeen. She takes the lift from her home to the ground floor and reaches Wah Fu (North) Bus terminus in several minutes, where she can take a bus to Aberdeen. It is rather ironic that she can visit amenities in other districts (by bus or minibus) more conveniently than going to those located in Wah Fu (I) Estate. 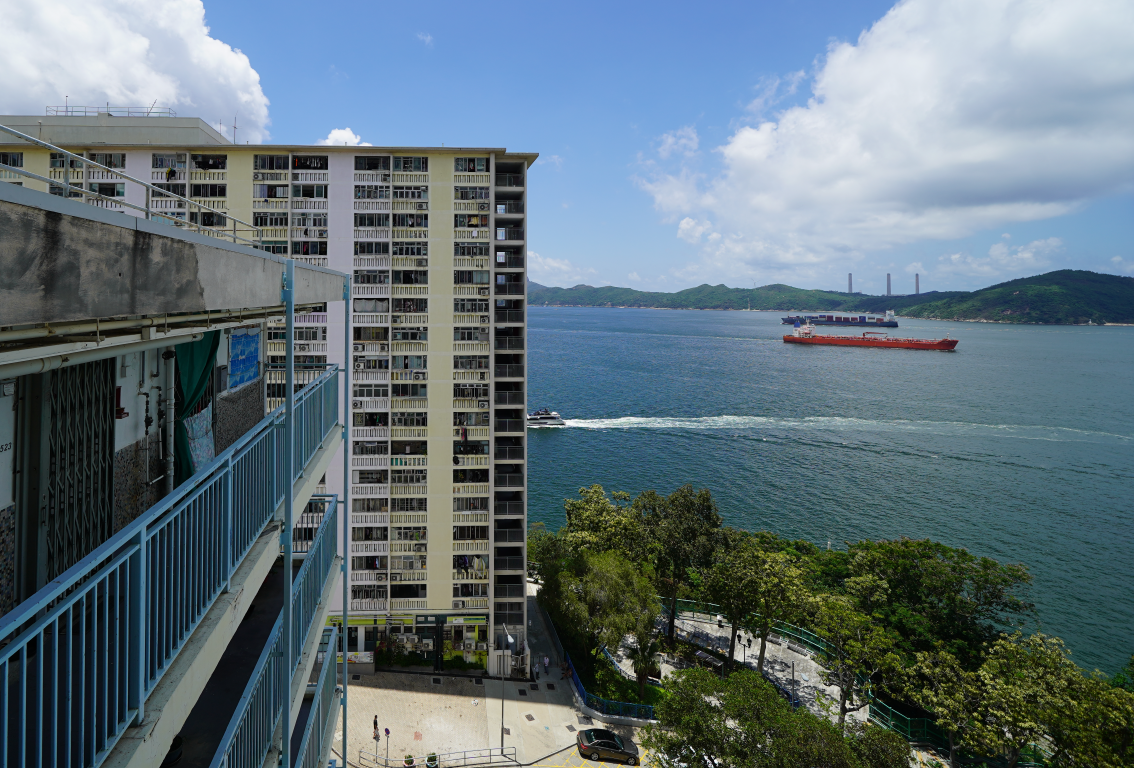 One of the most striking landscape characteristics of Wah Fu Estate is its proximity to water. In the early days, Wah Fu Estate residents had convenient access to Kellett Bay and Waterfall Bay. Some residents recalled visiting the beaches there for leisure while some even dug for clams there. Besides such happy memories however, there were also incidents of children drowning while playing by the sea. As documented in the Far East Builder Journal in February 1966, there was already a suggestion to develop the coastal area south of Wah Hong House and west of Wah Shun House ‘for public recreation’ [2] purposes. The area was later developed into Waterfall Bay Park but the current park design does not allow public access to the sea.

Given such a pristine site fronting the South China Sea, it is ironic that Wah Fu Estate (and Wah Kwai Estate) residents can now only enjoy the view but not to access to the water, an issue that would be well worth reconsidering in the future.

There is an underpass located below the Wah Fu Road. The stairs at its ends lead to Wah Ching House to Wah Chun House, and one of the entrances of Wah Kee House is accessible from there. It is guessed that the architect designed this circulation route partly because of the topography of the Wah Fu Estate site. Most residents do not choose this route even though the pedestrian path is covered. The haunted story there is probably one of the concerns. But the unfavourable design of the underpass is probably more crucial. Sunlight can barely reach the underpass, where proper lighting is insufficient. The water pipe alignments along the wall there make the space look more like a utility corridor rather than a pedestrian path. The underpass provides an alternative route from Wah Fu Road to the Wah Fu (I) Estate. But this function is probably fully replaced by the lift tower network next to it. The underpass is now rather desolate though it is located at the heart of Wah Fu Estate. 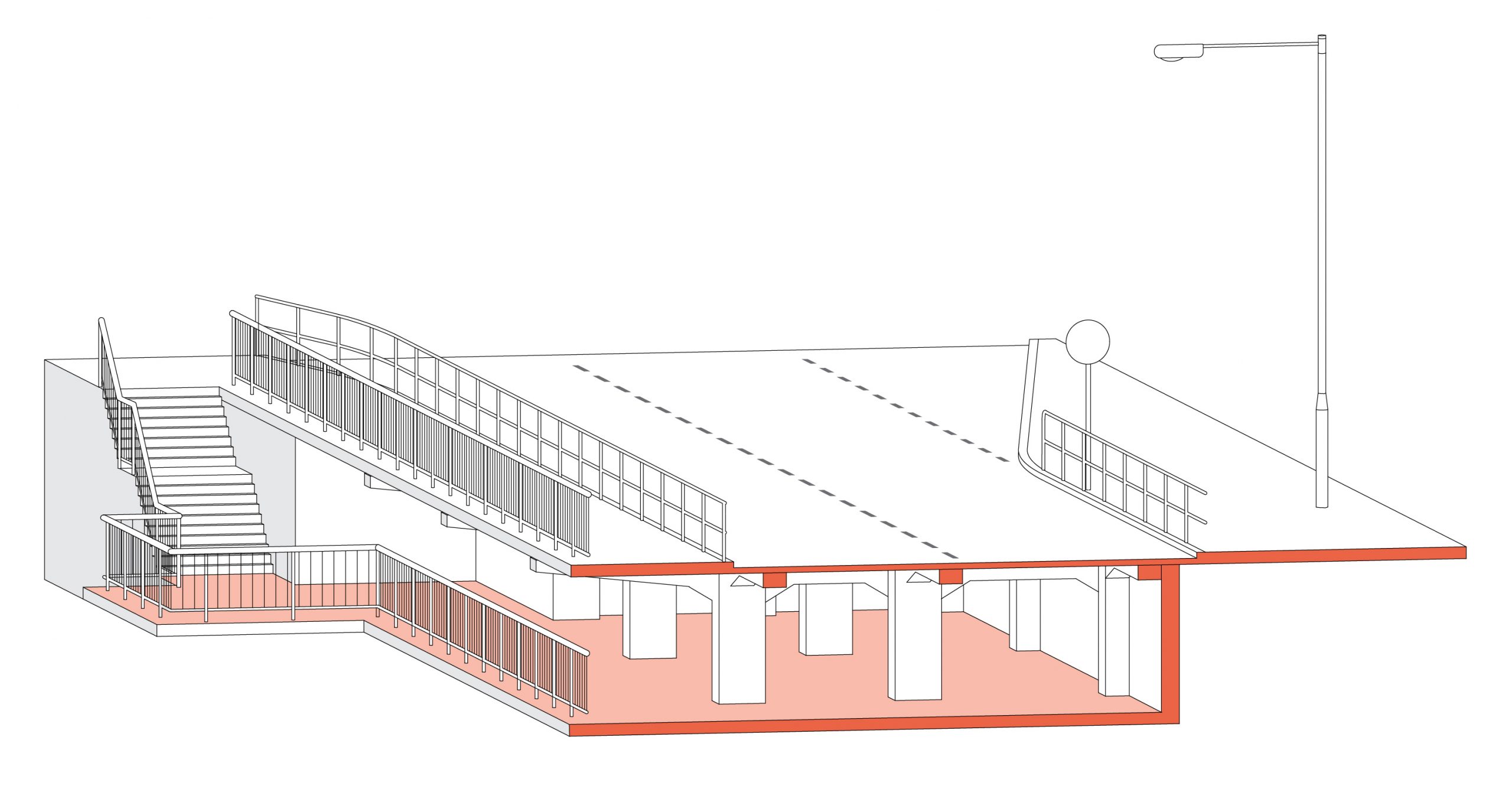 The underpass below Wah Fu Road