Wah Fu Estate is located in the southwest of Hong Kong Island, on a slope leading to two coves – Waterfall Bay and Kellett Bay. The north side of the estate is protected by Mount Kellett while the south faces the East Lamma Channel. Before Wah Fu Estate was built, the history of the site can be summarised by two keywords: waterfall and cemetery.

Hong Kong was located on the southern edge of the Chinese Empire before British colonisation. According to the Kangxi version of Xin’an Gazetteer in 1688, Waterfall Bay and Kellett Bay was administered under the fifth dou (都; an administrative level within a county) of Xin’an (San On; 新安) County.[1] The Gazetteer in 1688 did not record any village or market there.

Waterfall Bay is one of several similar coves in Hong Kong Island. The cascade there – which is relevant to Hong Kong’s colonial history – made Waterfall Bay distinctive. Historian Wang Gungwu argued that “[the] British began to have some knowledge of Hong Kong because of the waterfall”.[2] It is still unknown when and how the waterfall was discovered. It was probably the results of the surveys of the East India Company (EIC). In a British Admiralty chart by Captain Daniel Ross in 1815, Waterfall Bay was marked with “cascade for good water”.[3] Waterfall Bay became more famous among British and other European vessels.

Britain officially occupied Hong Kong Island in January 1842. Sir Charles Elliot, the first governor of the British colony of Hong Kong, had considered the south shore of Hong Kong Island as the center of the settlement.[4] But the northern shore was finally chosen. Waterfall Bay then became a remote and sparsely populated rural area.

Waterfall Bay remained famous in the early colonial days though its role as a fresh water source and maritime activities became less and less relevant. “Hong Kong” was given as the official name of the colony because of the cascade in Waterfall Bay. Scholar and missionary Ernest John Eitel recorded that the words “Hong Kong”, literally means “a port of fragrance” in Chinese, which at that time meant a village in now Aberdeen.[5] The British mistook “Hong Kong” as the stream leading the cascade and later even referred it to the whole of Hong Kong Island. For quite a long time, the cascade was still regarded as the reason why “Hong Kong” was named for the island. 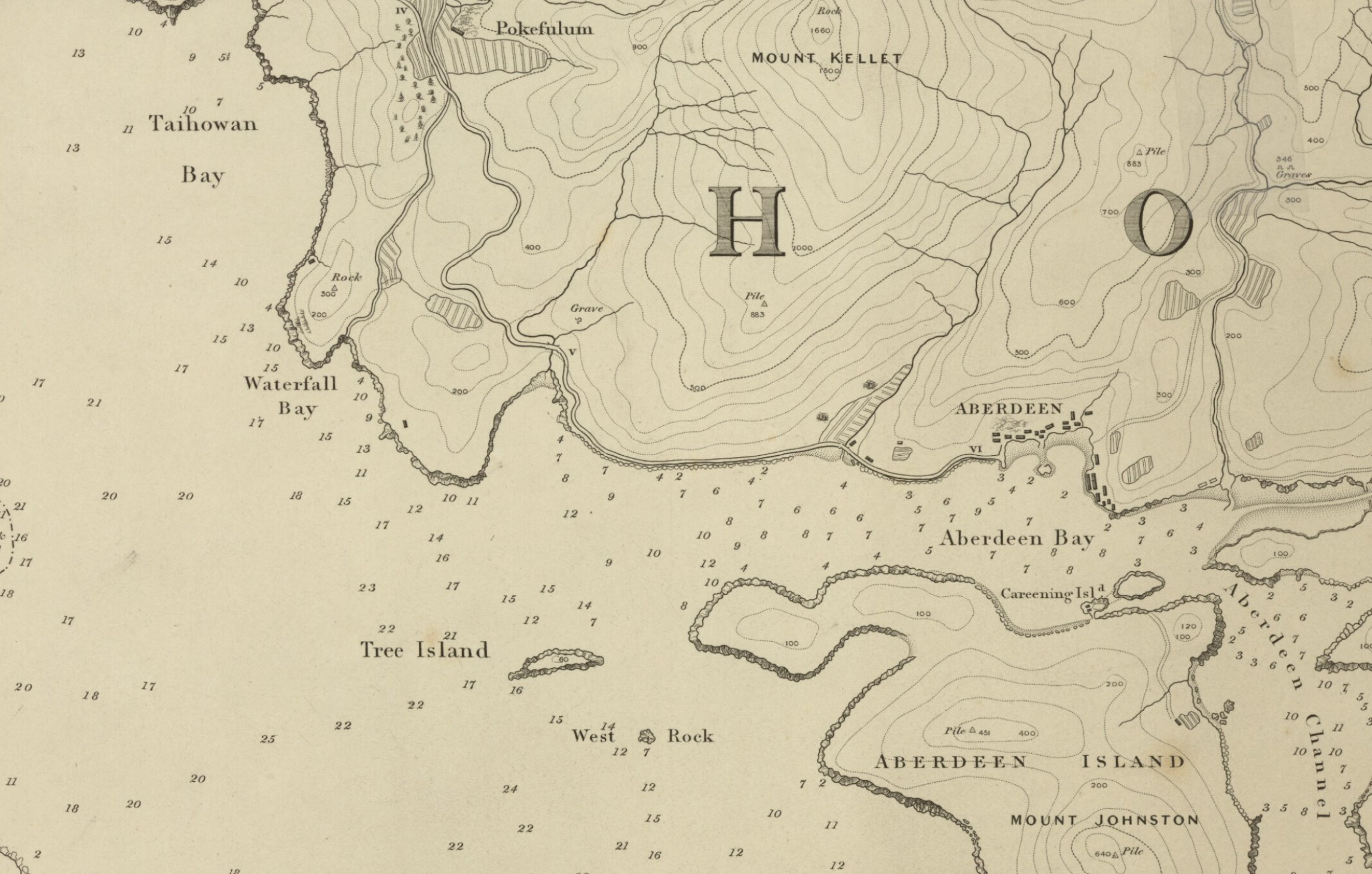 Part of the nautical chart that surveyed by Daniel Ross ,1815 (National Library Scotland) 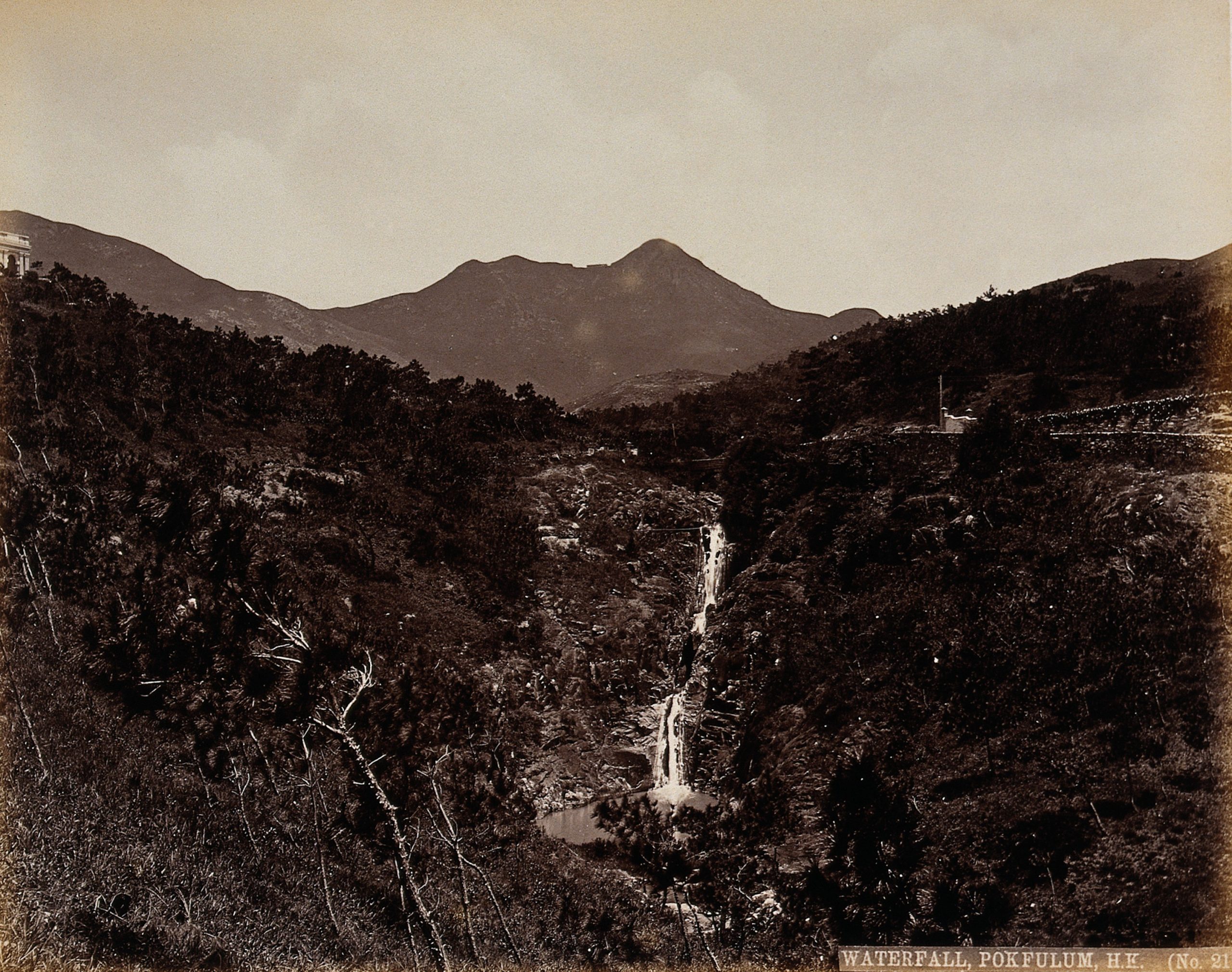 The lower stream to Waterfall Bay

Cemeteries for the Chinese Community

The west of Waterfall Bay is Kellett Bay. Kellett Bay was named after Lieutenant Henry Kellett. It is believed that its Chinese name, Kai Lung Wan, came from the cove’s shape, that is, similar to a Chinese style chicken coop. After Britain colonized Hong Kong, the northwestern shore of Hong Kong Island gradually urbanized but the southwestern side remained predominantly rural. In 1886, Dairy Farm was established. A large area of Pokfulam, roughly between Sandy Bay and Waterfall Bay, was designated for dairy farming. But Waterfall Bay and Kellett Bay were only located at the margins of the farm which had never reached the coast. 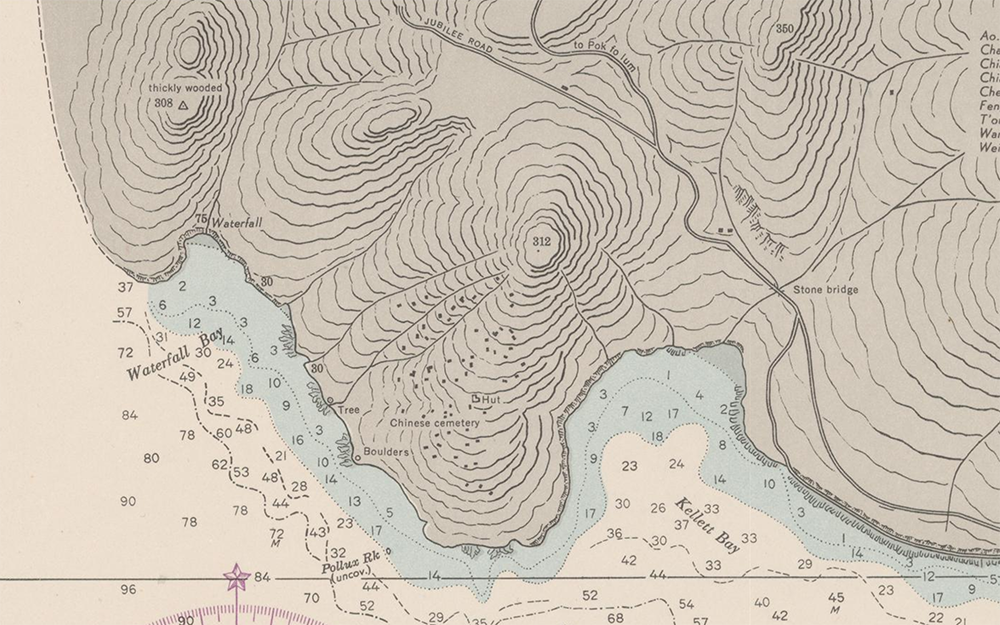 The great typhoon in 1874 caused about 2,000 deaths.[6] The colonial government reserved Kellett Bay as the cemetery for the casualty. The dead bodies were arranged by Tung Wah Hospital (managed by Hong Kong’s Chinese elites) to be buried at the “Public Graves for Typhoon Victims” in Kai Lung Wan. Tung Wah Hospital also built a memorial pavilion on site. This marked the most important change to Kellett Bay before the building of Wah Fu Estate, that is, designating the area as a site for cemeteries. There were graves at Kellett Bay before this decision was made but its scale was incomparable to Kai Lung Wan Cemetery. The map surveyed by Captain Morris Henry Smyth in 1901-1902 showed that the cemetery was built on the western side of the original graves along the hillock at Kellett Bay.

Though it shares a sea view similar to other parts of Pokfulam, Kellett Bay was labelled as a haunted area after the cemeteries and columbaria were built. The demand for cemeteries surged with the population growth. The British Colonial Government and European communities were worried about public hygiene arising from Chinese’ inhumation in the city center while the Chinese elites demanded to establish cemeteries for the Chinese community. Among other initiatives, the government established Kai Lung Wan Cemetery in 1901, including an area designated for unclaimed Chinese dead bodies. Kai Lung Wan East Cemetery was then built in 1907. Kai Lung Wan became one of the major areas for the Chinese community to bury the dead.

Between 1931 and 1941, the population of Hong Kong almost doubled with the influx of refugees fleeing from wars in the Chinese Mainland. Military facilities were built at Waterfall bay in 1940 to protect Hong Kong from Japanese invasion. The government planned to relocate the cemeteries at Kai Lung Wan in the 1930s. But political instability in East Asia delayed the relocation plan. During the Japanese occupation of Hong Kong, Kai Lung Wan Cemeteries were said to be used for burying the unclaimed Chinese and Japanese dead bodies. Kai Lung Wan Cemeteries continued to be used to bury unclaimed bodies after Britain regained control of Hong Kong in 1945.

With the influx of refugees fleeing from the civil war in the Chinese Mainland, the problem of housing shortage became pressing. Most refugees lived in squatter huts, pre-war tenement buildings and rooftop houses. Part of the original site of Kai Lung Wan Cemetery became the refugee’s homes. Some refugees built the base of the squatter huts with the gravestones taken at Kai Lung Wan Cemeteries. This practice accidentally preserved some gravestones around Chi Fu Valley today.

In October 1947, the government began to cease the operation of  Kai Lung Wan Cemetery. But Kellett Bay remained as home to many refugees for more than a decade. In 1963, the Hong Kong Housing Authority announced its plan to build Wah Fu Estate on the same site. The clearance of the remaining graves at Kellett Bay began in July 1963. The landscape of Kellett Bay and Waterfall Bay changed almost completely. Nevertheless, this part of history stays relevant to the daily life and memory of current residents of Wah Fu Estate.